Even in a time of unprecedented, global-scale oppression and concomitant resistance, it’s important to stay local. In that spirit I wrote to my hometown newspaper as Trump was signing his Executive Order on immigration and refugees: 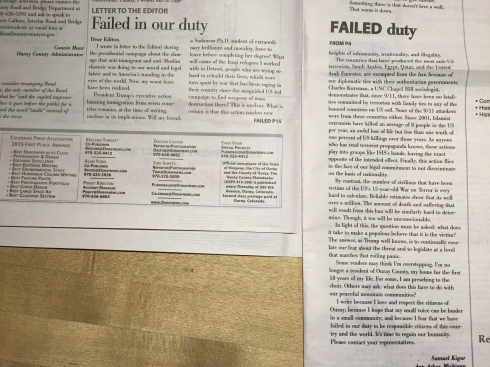 I wrote during the presidential campaign about the damage that anti-immigrant and anti-Muslim rhetoric was doing to our moral and legal fabric and to America’s standing in the eyes of the world. Now, my worst fears have been realized.

President Trump’s executive action banning immigration from seven countries remains, at the time of writing, unclear in its implications. Will my friend, a Sudanese Ph.D. student of extraordinary brilliance and morality, have to leave before completing her degree? What will come of the Iraqi refugees I worked with in Detroit, people who are trying so hard to rebuild their lives, which were torn apart by war that has been raging in their country since the misguided US-led campaign to find weapons of mass destruction there? This is unclear. What is certain is that this action reaches new heights of inhumanity, irrationality, and illegality.

The countries that have produced the most anti-US terrorists, Saudi Arabia, Egypt, Qatar, and the United Arab Emirates, are exempted from the ban because of our diplomatic ties with their authoritarian governments. Charles Kurzman, a UNC Chapel Hill sociologist, demonstrates that, since 9/11, there have been no fatalities committed by terrorists with family ties to any of the banned countries on US soil. None of the 9/11 attackers were from these countries either. Since 2001, Islamist extremists have killed an average of 8 people in the US per year, an awful loss of life but less than one tenth of one percent of US killings over those years. As anyone who has read terrorist propaganda knows, these actions play into groups like ISIS’s hands, having the exact opposite of the intended effect. Finally, this action flies in the face of our legal commitment to not discriminate on the basis of nationality.

By contrast, the number of civilians that have been victims of the US’s 15-year-old War on Terror is very hard to calculate. Reliable estimates show that its well over a million. The amount of death and suffering that will result from this ban will be similarly hard to determine. Though, it too will be unconscionable.

In light of this, the question must be asked: what does it take to make a population believe that it is the victim? The answer, as Trump well knows, is to continually escalate our fear about the threat and to legislate at a level that matches that roiling panic.

Some readers may think I’m overstepping. I’m no longer a resident of Ouray County, my home for the first 18 years of my life. For some, I am preaching to the choir. Others may ask: what does this have to do with our peaceful mountain communities?

I write because I love and respect the citizens of Ouray; because I hope that my small voice can be louder in a small community; and because I fear that we have failed in our duty to be responsible citizens of this country and the world. It’s time to regain our humanity. Please contact your representatives.